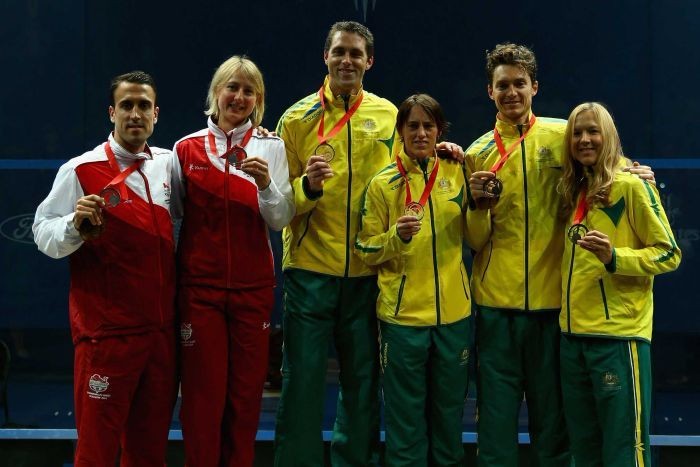 Commonwealth Games Australia is pleased to confirm the 10-member squash team to compete at Gold Coast 2018.

The team is headlined by David Palmer who has been selected for his sixth Commonwealth Games – a streak dating back to Kuala Lumpur 1998 – and teammate Rachael Grinham who will compete at her fifth Games.

Grinham, from Queensland, is a five-time Commonwealth Games medallist including two gold (Melbourne 2006, Glasgow 2014) while Palmer is also a dual gold medallist.

At 24 years of age, Tamika Saxby from Coffs Harbour is the youngest member of the team and will compete in the ladies singles.

"This is the pinnacle of our sport."

“It’s an honour to not only be representing Australia but to be up there with those experienced players on the team.

“We’re a great bunch and we all get along really well and push each other to achieve our best. It will be great to all be there on the Gold Coast together as a team.

“This is something you dream of as a kid. You sit there watching it on TV and you just think gee wouldn’t that be great to do that one day and fortunately enough I’ve got to pinch myself that I’m actually in a position where I am doing that now.

“There’s a rollercoaster that comes with this, there are many ups and downs. It’s been a really long time in progress, so it’s great it’s finally make my first Commonwealth Games team,” Saxby said.

“The announcement of athletes officially onto the Australian Team is really exciting and I congratulate the 10 athletes who have been selected today,” he said.

“These squash athletes spend a lot of time competing overseas and many are based abroad, so to be part of a Commonwealth Games team on home soil will be very special for them.

“What an amazing achievement from David Palmer and Rachael Grinham to be named on their sixth and fifth Commonwealth Games team respectively. And what an opportunity for some of our emerging players to learn from them,” Moneghetti said.

Squash was introduced into the Commonwealth Games program in Kuala Lumpur 1998.

Australia is the leading squash nation at the Commonwealth Games with nine gold medals and 30 medals overall.

Tickets for the GC2018 squash competition are available at GC2018.com