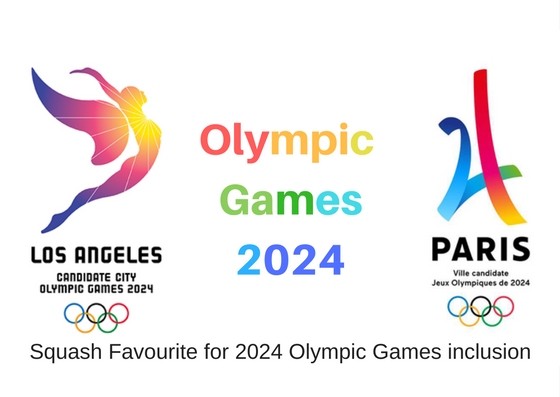 Bidding for the 2024 Summer Olympics games started in 2015, with five candidate cities in contention, but Hamburg, Rome and Budapest subsequently withdrew. The two remaining candidate sites are Los Angeles and Paris.

The World Squash Federation (WSF) has made clear its desperation to join the Olympic programme. So have leading squash players: James Willstrop and Nicol David; the eight-time women’s world champion, has repeatedly said that she would swap all her world titles for an Olympic gold medal.

By the criteria that the IOC uses to measure prospective sports, squash has a strong case. The sport has genuine global appeal: last year 47 countries hosted tour events, featuring players from 74 nations. There are 1.6 million American players, and more than 20 million worldwide, according to US Squash.

New rules allow the hosts to propose additional sports which bodes well for squash since both countries have good squash programmes.

Squash in the USA has largely been driven by high-end country clubs, this has fuelled its development in the Collegiate sector with Harvard, MIT, Cornel etc having very strong squash programmes. US Squash has played an excellent role in bringing together all of these influential stakeholders to position the sport in a great place for Los Angeles inclusion.

Squash is developing well in France and has a good media presence, as well as social standing as the sport is played by many in the middle class.

The WSF believes that squash would enjoy significant benefits if it were added to the Olympics —Olympic inclusion would still produce something of a boom. It would entitle the sport to funding from the IOC; Mr Shelley says that even a few million dollars over a four-year cycle would make a “substantial difference” to the WSF’s development work. Yet the most significant benefits would not be financial, but in “visibility”, he says. Seeing the event in the games would help to grow squash’s fan base. And the prospect of winning an Olympic medal would also give young players another incentive to pursue a career in the sport.

Logistically, squash would also be an easy fit for the games. The event that the WSF has proposed—singles tournaments for men and women, featuring 32 players apiece—could be run exclusively on two all-glass courts, either inside or outside. And squash has already shown its suitability in other multi-sport events: more than one million people watched the men’s singles final in the last Commonwealth Games. “We would bring something special to the Olympics,” says Andrew Shelley, the chief executive of the WSF.

The campaign to win inclusion for the 2024 games is already underway.