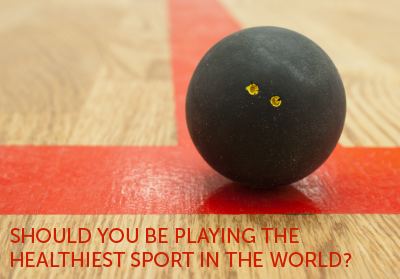 According to a survey by Forbes Magazine, squash was rated top of the leader board for healthiest sports in the WORLD.

If you're wondering what makes squash so healthy, we've got the lowdown on the Forbes survey below.

You’re probably asking yourself how does it get better than that? But it can…

Recently the British Journal of Sports Medicine underwent a study which examined information on more than 80,000 adults across England and Scotland who took part in national health surveys between 1994 and 2008.

The study found that risk of death from any cause was 47% lower among those who played racket sports. The study suggested that regularly playing squash could help stave off death the longest.

Scientists have narrowed down the sports and types of exercise that are linked to significantly lower odds of dying before those who do not do those activities. The research concluded that racket sports, swimming, aerobics and cycling seem to be the best for prolonging life, in that order.

Meanwhile, those who partake in racket sports such as squash, also have a lower risk of dying from cardiovascular diseases such as strokes.

After taking into account influential factors, the authors of the paper identified which sport or exercise seemed to be the most beneficial.

No such associations were seen for runners or joggers and those who played football or rugby. When the researchers looked at the risk of death from heart disease and stroke, they found that playing racket sports was associated with a 56% lower risk, swimmers had a 41% lower risk and aerobics participants had a 36% lower risk compared with those who did not participate in these sports.

The researchers did find a 43% reduced risk of death from all causes and a 45% reduced risk of cardiovascular disease among runners and joggers when compared with those who did not run or jog, but this advantage was not deemed significant when influential factors were taken into account. They cautioned that the impact of running and jogging might have been underestimated.

The study suggests that squash is ultimately the best sport to play to ensure a long life.

So what's so great about squash?

According to Forbes, 30 minutes spent on the squash court gives you 'an impressive cardio respiratory workout.' Constant running and rallies build endurance and muscular strength in your lower body, and squash can even improve flexibility in your core and back, thanks to the twists, lunges and turns necessary to keep the ball on the go.

Each sport in Forbes' survey was given a score out of five across six categories:

Squash scored an impressive 5 out of 5 for muscular endurance and calories burned (517), 3 for muscular strength and flexibility and 2 for injury risk.

Squash is a game that can be played at any age. It is easy to learn and there is modified games and equipment to suit every size and skill level. For more information on how to get your kids involved, visit http://www.squash.org.au/w/participation/court-finder